Victorians are already experiencing effects of our damaged climate. Across Australia, heatwaves are becoming hotter, longer and more frequent.

In Victoria, the two worst heatwaves on record have occurred in the past 10 years; January/February 2009 and January 2014. But the records have continued to tumble since then.

In January 2018 Bendigo experienced a record breaking 12 consecutive days over 35°C (Breaking the previous record of eight days, set in 2014).

And January 2019 was Australia’s hottest-ever month on record, during which an extreme heatwave swept across Northern Victoria, and Albury-Wodonga set its highest ever recorded temperature of 45.3 degrees.

These events are just isolated examples of the broader trend of increased temperatures, lower rainfall and an increase in extreme fire danger, which are predicted to worsen over coming decades as the climate emergency intensifies. Extreme heat events are increasing across Australia. Source: BUREAU OF METEOROLOGY, 'STATE OF THE CLIMATE 2018', P.4

This will have a profound impact on the Australian way of life, including our health, roads and railways, our food, our natural world, our power supply, and our economy. This increasing heat also combines with other long-term impacts like declining winter rainfall to supercharge bushfire risk.

Since 1990, winter rainfall in Victoria has been decreasing, already down almost 100mm on average since 1990. Projections for the future

The future we get depends on the choices we make now.

The latest projections from the CSIRO show that, under a worst-case scenario where heat-trapping carbon emission are not cut rapidly, Melbourne could feel more like north-eastern Victoria (e.g. Wangaratta) by the 2050s, and Melbourne could see an unprecedented 50 degree day within decades. 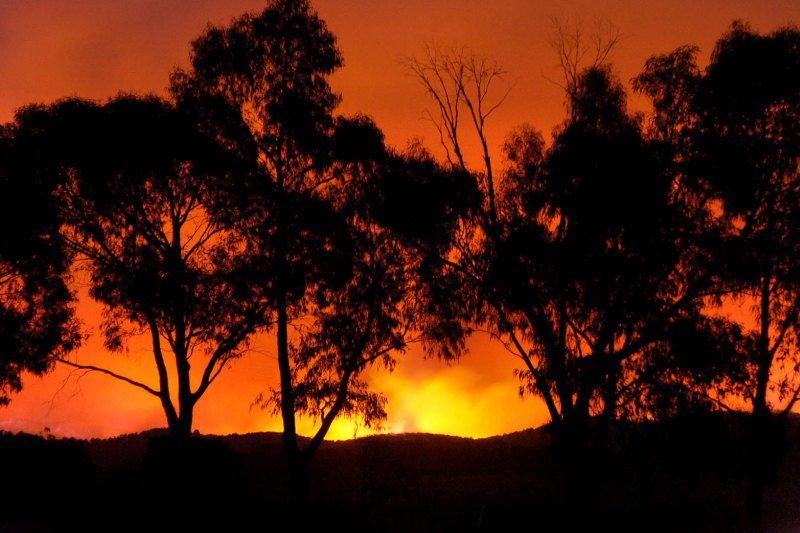 New CSIRO climate change projections show Melbourne could feel more like north-eastern Victoria, where sustained heat is common, by the 2050s under a worst-case scenario.

Victoria’s ‘Climate Science Report 2019’ maps out what this scenario looks like for other towns and cities across the state. These projections paint a picture of a world we should try desperately to avoid and we can only do that by cutting greenhouse gas emissions as quickly as possible.

Extreme heat is a serious health risk. Heat stroke, exhaustion, cardiac conditions, respiratory illnesses, and falls due to dehydration place an immense strain on our emergency services. So much so that heatwaves are actually responsible for more deaths each year than any other type of disaster, including bushfires.

For example, in the lead-up to Black Saturday in 2009, 374 Victorians were killed by exposure to extreme temperatures during the heatwave. There was also a 46% increase in emergency cases at hospitals across the state, including a 2.8-fold increase in cardiac arrest cases.

Heatwaves are Australia's deadliest natural hazard, but a recent survey has found that many vulnerable people do not have plans to cope with extreme heat.

The young, sick, elderly are particularly vulnerable. And the problem is made worse by the fact that Melbourne’s housing is very poor quality and not properly designed to cope with these increasing extremes. Our homes are not designed for extreme heat. Here's what the government needs to do.

Heatwaves are deadly and the poor quality of Melbourne’s housing is an urgent health issue. There’s no time to lose in making our homes more climate resilient.

Our electricity grid infrastructure, especially ageing coal power stations, are vulnerable to faults and breakdowns in the heat.

As our damaged climate results in longer and hotter heatwaves, coal power stations are getting critically hot more often. “When temperatures in control rooms get as high as 50 or 60 degrees,” writes Peter Martin in The Age, “the electronic control systems buckle and the boilers leak.”

The Australia Institute report Can’t Stand the Heat notes that Australia’s aging coal and gas fleet is not designed to operate in extreme weather conditions.

For example during the February 2017 heatwave, 3600 megawatts (MW) failed during peak demand periods in South Australia, New South Wales and Queensland, equivalent to 14 percent of Australia’s coal and gas generation in those states.

Heatwaves can cause havoc for our roads and railways, which are unable to cope with these increasing extremes.

In January 2018 a 10km section of the Hume freeway literally melted. And extreme temperatures can cause train tracks to buckle, overhead power lines to sag, and motors to overheat, meaning trains need to either go very slowly or they can’t run at all. Extreme temperatures can cause train tracks to buckle, causing chaos for the whole system.

Extreme heat can be devastating for native wildlife. From mass fish kills in the Murray-Darling, to thousands of flying foxes dropping dead from the trees and possums driven to drink seawater out of extreme thirst.

This is especially so for animals like Flying Fixes who can’t sweat, and rely on dipping their bellies in the water as they fly to keep cool, or birds like the threatened Hooded Plover that nest on the beach and tries to keep their chicks cool by dipping their wings in the water and using them to provide shade.

You can help by leaving some water out in a shady spot for so native animals can have a drink when extreme temperatures are forecast. Rescuers found 127 ringtail possums along the shoreline and in the water on Victoria’s Mornington Peninsula after they succumbed to extreme heat.

Addressing the climate crisis will require a wide range of solutions. But when it comes to heatwaves there is one simple strategy that ticks all the boxes.

But right now Victoria’s housing is generally of a very poor standard. Many Victorians, especially renters, are unable to stay cool in their own homes because they are poorly insulated  and they cannot afford to cool them with air-conditioning.

Better insulation, draught-proofing and other simple and affordable solutions can make a huge difference. That’s why Environment Victoria has been working as part of the One Million Homes Alliance to advocate for solutions.

You can read more about our successful and ongoing work on energy efficiency for rental properties here.

We have also recently launched a campaign to improve the information that prospective renters and home-buyers receive about a property’s energy efficiency at inspections.

When surveyed most people indicate that a building’s energy efficiency would influence their decision. So better access to that information will help to ensure efficiency measures are prioritised by the building and real-estate industry. You can learn more and get involved here.

CSIRO and Bureau of Meteorology (2018), State of the Climate.

1.5 degrees? Answers to the top four questions about the IPCC’s 1.5°C report